Vietnam Wall Vietnam Wall First click on a state. When it opens, scroll down to the city and the names will appear. Then click on their names. It should show you a picture of the person, or at least their bio and medals. This really is an amazing web site. Someone spent a lot of time and effort to create it. I hope that everyone who receives this appreciates what those who served in Vietnam sacrificed for our country. The link below is a virtual wall of all those lost during the Vietnam war with the names, bio's and other information on our lost heroes. Those who remember that time frame, or perhaps lost friends or family can look them up on this site. Pass the link on to others, as many knew wonderful people whose names are listed. 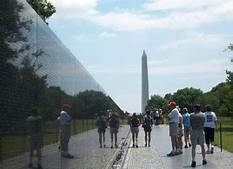 A little history most people will never know.

"Carved on these walls is the story of America, of a continuing quest to preserve both Democracy and decency, and to protect a national treasure that we call the American dream."  ~President George Bush

SOMETHING to think about - Most of the surviving Parents are now Deceased. There are 58,267 names now listed on that polished black wall, including those added in 2010.

The names are arranged in the order in which they were taken from us by date and within each date the names are alphabetized. It is hard to believe it is 36 years since the last casualties.

Beginning at the apex on panel 1E and going out to the end of the East wall, appearing to recede into the earth (numbered 70E - May 25, 1968), then resuming at the end of the West wall, as the wall emerges from the earth (numbered 70W - continuing May 25, 1968) and ending with a date in 1975. Thus the war's beginning and end meet. The war is complete, coming full circle, yet broken by the earth that bounds the angle's open side and contained within the earth itself.

For most Americans who read this they will only see the numbers that the Vietnam War created. To those of us who survived the war, and to the families of those who did not, we see the faces, we feel the pain that these numbers created. We are, until we too pass away, haunted with these numbers, because they were our friends, fathers, husbands, wives, sons and daughters. There are no noble wars, just noble warriors.